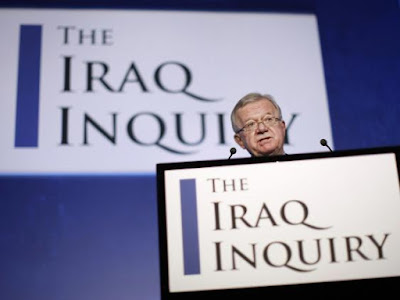 Well. We learn the lesson time and time again. And then a week later, we forget it. Whether it is Brexit, Trump, Benghazi, Clinton’s e-mails, or now, for the – how many British Iraq War Reports have there been? – umpteenth time. The more information we are given by establishment figures of supposed repute, the more we can be absolutely certain we are still in the dark.

And so. Gee. Which first? The plug? The explanation? The expose? The conspiracy theory? Tell you what. I’ll leave you to do most of the legwork this time. I’ll try to keep it simple.

I have written essentially two books. The first one, very kindly published by a wonderful gentleman called RA Kris Millegan, and entitled Maggie’s Hammer. The other is the kitchen sink version, from which the latter was artfully distilled, and is known as Dead Men Don’t Eat Lunch.

I’m not going to feed you the rationale for that belief. If you really care, buy the books. I have only three things to say:

1) A British government scientist called David Kelly ended up dead in the woods (there was a lot of that in my story) because he believed that, in 2003, there remained substantial potential in Iraq for Hussein to construct a deadly biological weapons capability, and the British government were lying about it.

He believed this because he was the lead scientist tasked by the United Nations Special Commission on Iraq (UNSCOM) with reporting in 1998 on what still existed in Iraq with respect to its biological weapons program after seven years of United Nations inspections.

Kelly produced a 100-page report setting out all that still remained in Iraq in this latter regard. This was no ‘sexed-up’ report. No Blair pipe-dream. It was Kelly’s factual account. And it related only to biological weapons. Similar reports were produced in respect of Iraq’s continuing chemical and nuclear ambitions.

2) Nick Cohen, currently a columnist with the respected (London) Observer newspaper, laughed at me in, ooh, I dunno, about 2005, when I ran by him my rationale for suggesting that the Iraq invasion was merely a cover to make Iraq’s WMD’s disappear.

He did me the courtesy of not laughing when I asked him the following, rather convoluted question: Ok Nick, so, when the US and the UK governments told you and the rest of the world’s gathered media that, oops, there aren’t any WMD’s after all, how many of you stuck your hands up in the air, and said, um, hang on, holding all the UNSCOM reports here, the ones from 1998, when their inspectors were thrown out by Saddam, the ones with the pretty maps showing us where all the weapons sites were/could be/should be. Er. When are we going to be taken on the grand tour, to prove to us that all these sites no longer exist?

Not only did Nick not laugh. He did me the further courtesy of saying, in no particular order: huh, good question, and, er, no-one …

Mind you, he didn’t want to talk to me any more. This might have been ‘cos I didn’t know when to stop. And I might have made the rather dry point that, he and the world’s gathered media simply bought the first explanation on offer from the very same people they had just accused of lying …

3) Would anyone care to explain to me how it was that ISIS, you know, the nasty military group headed by Saddam’s former generals, how they managed in 2014 to lay their hands on the very same chemical weapons in Iraq that, you know, weren’t supposed to exist?

I think I’ll leave it there. You read Chilcot. Believe what you want to believe. Then, construct your own conspiracy theory …