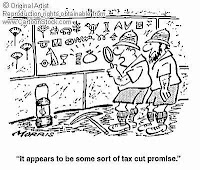 [Paul Aaron is a well-known poet and progressive activist in Hillsborough, North Carolina. He is also my brother-in-law.

He, like me, believes that the work of resurrecting hope in this country only began with the Election of President Obama.

It will require each one of we citizen activists, through networks like Blogger, to continue to articulate what we want an Obama Presidency actually to do.

And almost more importantly, what sort of a 'feel' we want it to have, and to generate in our country, and around the world.

This is Paul's opening shot on the subject of taxes. I don't necessarily agree with all that he says.

But, he doesn't have a Blogger account with friends. I do. The most important defense of democracy is to be found in the constant dissemination of knowledge. I'm happy to help him disseminate his.]

Who paid for World War I?

“I did,” said John the baker. “I worked hard to feed soldiers and civilians. I didn’t make much money, but I did my part. I was a patriot and saved the world.”

Who paid for World War II?

“I did,” said GI Joe. “I fought to keep the United States of America free. While I was overseas, my wife, Jessica, ran her restaurant and paid her taxes. Kept our country out of debt. That war cost our country lots of money but everyone paid their taxes to keep our country’s economy strong.”

Who paid for the Korean war?

“I did,” said June the factory worker. “I built airplane wings for our fighter pilots. My pay was low but I was a patriot and paid my taxes to support my country.”

Who paid for the Viet Nam war?

“I did,” said GI Jane. “My husband, already disabled in the war, worked from his wheelchair. While I was in Nam he paid taxes to support our country and to make sure our country did not go into debt.”

Who paid for the Iraq war?

“Not me,” said Joe the plumber. “I needed a tax break while our soldiers fought.”

“Not me,” said Jill the stock broker. “I made lots of money here at home while the Armed Services did their work over there. I didn’t have to pay a cent, and now the bailout has covered my company’s losses.”

“And not me,” said Jim the banker. “I bought a second house and then a third. I like it when we fight these wars. I especially like the tax breaks.”

Then who is paying for this war?

“Not me,” said Jewell the political activist. “Our President said that we can be patriots, watching while the soldiers and the security contractors fight this war. Our national debt is huge and someone will have to pay it off.”

I’ve been thinking about the word “tax.” The word “tax” riles us. Yet, President James Madison believed that “taxes are what make a civilized society.” Similarly, the word “king” has a nice image but if we visualize the United States ruled by one, the word is suddenly not so attractive and romantic. Context always changes meaning.

Perhaps “tax” is actually good. We are not taxed to fund a king's dynasty; we are United States citizens and therefore, we the people are the government. By paying taxes, we provide crucial resources for ourselves. How can essential taxes be characterized so negatively?

“Tax cut” sounds so nice in some contexts. We must find a new word to replace “tax” so that we can feel good while we pay for our necessary services. Or we can create a context for Americans that links “tax” to “roads,” “schools,” “safety,” “democracy,” “freedom,” and “liberty.”

How did we get to this desperate economic place? We redistribute wealth by having tax breaks for the upper class—to the billionaire CEOs and corporations—to the hedge fund money managers and the oil magnates, and by increasing every day costs such as gasoline and food. Redistribution of wealth to the super wealthy is still redistribution of wealth.

The rich get richer, the poor get poorer and the middle-class gets squeezed out. Joe the plumber and Jessica the restaurant owner will do just fine if we stop redistributing the wealth to the wealthy through corporate tax breaks.

“I am paying,” smiled the president of China. “America has borrowed all its money from me. For China, it is good that American citizens do not pay their taxes for this war. We make money hand over fist from every dollar borrowed to pay for the Iraq war. Then we can buy land in America. We bought a good piece of IBM, too. We own America.”

“No, I am the financier,” smiled North Korea. “America has borrowed its money from me. For North Korea, it is good that American citizens do not pay their taxes. We own America.”

“And I am,” smiled a European tourist on a shopping spree, buying up a piece of Manhattan. “In the last 18 months we tourists bought one-third of all new Manhattan condos that were for sale, while native New Yorkers remained worried about bonuses and the economic climate,” (paraphrase from Christine Haughney of the New York Times of December 21, 2007).

“And I am,” smiled the United Arab Emirates. “Abu Dhabi Media is flush with oil cash. We reached a $1 billion deal to make movies and video games with Warner Brothers, the big Hollywood studio owned by Time Warner,” (paraphrased from Tim Arango of the September 3, 2008 New York Times). “For the United Arab Emirates, it is very good that American citizens do not pay their taxes for this war. We, too, own America.”

“And I am,” smiled Saudi Arabia. “China pays us for oil from money they make investing in the Iraq war. We, too, own America.”

Wow! So you all get rich because of our tax breaks. Is that right?

OK, so you’re saying corporate tax breaks come from thinking that if the rich get richer, money trickles down all the way to the poor, and we all share the wealth.

“Yup, but the only people who are sharing the wealth are us,” say China, North Korea, Saudi Arabia, the United Arab Emirates and the billionaire American CEOs and hedge fund managers. “And we like it...”
Posted by Geoff Gilson at 4:29 PM No comments: