Armlock and Malleable [The Redux]: What Goes Around ... ?? 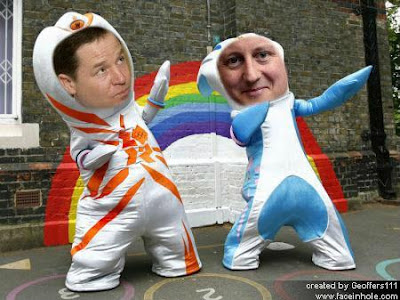 Were the 2012 UK Local Election results bad for the British Coalition Government? Yes. Do they spell the end of that Government? No. Why? Because there ain’t nowhere else to go. Wenlock and Mandeville are more likely to get married than the LibCon Coalition is likely to bust up.

First, the noise. I wrote in February 2010 that Dave was sowing seeds of rebellion amongst the ranks of his own MP’s (existing and to be). Well, what went around is now coming around. Exacerbated by the fact that a large pool of frisky Conservative MP’s, all vying for a small number of juicy ministerial portfolio’s, had that number reduced even more by the Coalition with the Liberal Democrats, and now find themselves possibly facing the political abyss at the next General Election.

Forget screaming for Dave’s head. If I were a Tory MP in a marginal seat, I’d be curled up in a corner of the Commons’ Tea Room, with Blankie and a hot cup of cocoa, writing love poems to Lord Ashcroft. Sat right alongside all the Liberal Democrat MP’s composing sonnets to Lord Ashdown. Will it make a fig of difference? No. First, the bad news for the screaming Tories. And then the hey-we-get-to-stick-it-to-someone-else news.

The bad news? Tory MP’s can scream all they like. They can even force a ballot to overthrow Dave as Leader. But, to whom will they turn as an alternative? David Davis? Yesterday’s news. John Redwood? Pre-history. Liam Fox? Hardly Mr. Teflon. Which leaves? Yup. Boris Johnson. Ok, let’s clear that one out of the way.

There is next to no difference between Boris and Dave. With the exception that Dave has had to deal with a huge number of conflicting crises, while trying to find compromise with a Coalition partner. Boris, bless him, has no real power, and has had nothing of any real significance to handle. It was easy for him to look good getting rid of some of Red Ken’s wilder fancies, cut a few taxes, bring back the double-decker buses, and play the goof on London weekend television.

There is absolutely nothing, save the hyperbole of the media and Boris’s closest chums, to suggest that Boris could have done a better job than Dave, or would be able to pursue a significantly different political path. Besides, as fickle as the British electorate have become over the past few decades, I think that even they are getting a bit sick of PM’s getting changed without their say-so.

As for the Liberal Democrats (this, for any rabid Tory, is the stick-it-to-someone-else news), I think the greatest disrespect the British public have for them is not that they have supported austerity measures, but that they have been seen to ditch their most sanctified electoral promises in order to continue supping at the high table of political power (cf. tuition fees).

Whatever Liberal Democrats may think of Nick Clegg, Dave Cameron, austerity, posterity and the 300 some councilors who just lost their seats, they know, deep in their hearts, hidden away in the smoke-filled back rooms, that what little pulling power they have left in any polling booth will dissipate like so much will ‘o wisp if they take any steps that can be interpreted as being only about their continued opportunity to participate in government. Be that ditching Clegg or forming a new alliance with Labour. They are stuck with the Conservatives until at least 2014, when both Parties in the Coalition will likely ease apart, in advance of General Election 2015.

What of the future? I think for the answer, one needs to look at a whole bunch of other questions. Why did Dave create hostages for fortune with his huge 2010 intake of new Tory MP’s? Why has he been so rude to the 1922 Committee of Conservative Backbench MP’s? Why has he ignored the feelings of his fellow Tory ministers, in order to form a close alliance with Nick Clegg?

I saw some of this coming in an article I wrote in May 2010. The bottom line is this. Dave really does see himself as the Tories’ Tony Blair. He truly does believe that he, and a small band of merry men, are destined to save the Conservative Party from the clutches of right-wing nutters, who consigned the Conservative Party to insignificant Opposition for thirteen years. And that the future for Tories is a middle-of-the-road progressive position, whether in Coalition with the Liberal Democrats, or as a stand-alone Liberal Conservative Party, shorn of all right-wing poison.

Furthermore, Dave feels that the path to righteousness is bound to be one littered with unavoidable pain. He will piss of the Party at large, when he centralizes power in his own hands, in order to ensure the success of his revolution. He will upset the Constituency Associations by parachuting in the A-List Team of his choice, all the better to fill Parliament with his lackeys. He cares not a toss about the 1922 Committee. And he will continue to arrive late for Cabinet Meetings of his own Ministers, so that he can finish the pre-Cabinet agenda preview with his new progressive mate, Nick.

I have a feeling that Dave is an interesting mix. I genuinely believe that he thinks he is doing what is right for Great Britain. And that ‘right’ is not the ‘right’ of the Tory right-wing. It is Liberal Conservatism. But, at the same time, he is capable of unutterable ruthlessness. He realizes has he has only a small window of opportunity, and he will do all that he needs to take advantage of that window, including sacrificing his own elected fellow politicians, the Liberal Democratic Party, and even his own Prime Ministership. I suspect that Dave has already calculated that he may only govern for one Parliament. And that he will use that Parliament to set the country straight, and move his own Party irrevocably to the centre.

In that light, Dave has followed the classic playbook of a first-term activist administration. He has attempted to do as much as he can in the first couple of years, before fear, electoral exigency, gas, whatever finally set in, and slow it all down. What the media are lovingly calling the ‘omnishambles’ of the Coalition Government is not the consequence of a Coalition that cannot make up its mind; it is the result of a Coalition attempting too much.

So. Will Dave and Nick effect a U-Turn? No. Have a look at history. This is precisely where Margaret Thatcher was in 1981, when at the Party conference of that year, Cabinet Ministers were lining up at fringe meetings, barking for her to change course. I know. I was there. Got my first bit of national publicity (in “The Sun” – right next to Samantha Fox; still my beating heart!). When I mauled Sir Ian Gilmour, Deputy Foreign Secretary, for daring to criticize the Blessed Margaret (ok, let’s not go there … ).

Dave likes his history. He reckons himself a part of it. He won’t turn. And he will make great show of his not turning. He will tighten up focus in his legislative agenda. Maybe put some of the more esoteric social issues on the backburner. We won’t be hearing about Big Society for a while. He will move into consolidation gear. Focus on the big ones – the economy; welfare; education. Take it a step at a time. Set out simply what is to be achieved. Achieve it. Say he’s achieved it. Move onto the next issue. But he won’t turn.

Will he shift appreciably on his economic and fiscal goals? No. He believes he is doing what is right. Even if it costs him the next General Election. Look, the Budget really wasn’t that bad. It just wasn’t terribly well presented. Yeah, the top tax rate of 50% was cut. But the threshold for those at the bottom was raised too. What were there, some £3.5 billion in tax cuts overall? Eat that Boris and the Tory right-wing!

Too many folks have too easily bought the press from the past thirty years. That a little bit of spending here, a tax cut there, and bingo, the boom will be back. The boom is over. The party is finished. On every occasion we have fought our way out of economic correction since the beginning of the Eighties, we have attempted to rush recovery with unwise fiscal expansion. I truly believe that Dave is committed to not making that mistake this time. There may be some room for a little extra spending on infrastructure projects. But, beyond that, I would say that we all need to get sued to slow economic growth or no growth for some years to come.

Look, in 1970, Thatcher did not inherit a recession. She inherited a mess. But she is the one that created the recession while tightening the financial belt, to overcome Labour’s largesse. Dave took over an economy that was both in a financial mess, and already in recession. Everyone was agreed that the belt, once again, needed to be tightened. We may have disagreed on how much. But please remember this, the Liberal Democrats have not been sitting in the wings. With outspoken Ministers holding the No. 2 Portfolio in the Treasury, and the No. 1 portfolio at Business, the Liberal Democrats have been front and center in all the economic decisions taken by the Coalition. It hasn’t just been Dave and George.

So. What did people think was going to happen when we tightened the belt on an economy in recession? If the Coalition is guilty of anything, it is that it did not do enough to prepare people for the inevitable. And that is the next area Dave where will make concessions, without actually changing direction. He will reach out more to his own Party. Have a cuppa with 1922. Get to Cabinet Meetings on time. Tour some constituency associations. Make Michael Fallon Chairman of the Party. Dave may focus on doing a better job of explaining and assuaging. But he won’t make any concessions on his bid to modernize the Party, nor on his central goal of fixing the country’s finances.

So. There you have it. Or, at least, my opinion of ‘it’! The Coalition had some awful mid-term election results. But, we are only two years into a five-year Parliamentary Term. The Coalition will regroup, re-focus, slim down, hire bring in new PR, and continue on its path to a reformed economy and society, anchored by a centrist progressive political movement.

I like the way Charles Moore sums it up in the London Daily Telegraph, which he once edited: “Boris has always kept the end in view. So should the Coalition. It will not prosper because one bit concedes something – minimum alcohol pricing, an elected second chamber, gay marriage, whatever – to the other, but because people can have faith in its essential purpose of national recovery. That purpose is intact, but almost invisible. Now is the time to relaunch a new, improved, slim–line Coalition with greater pride and passion than before. “
Posted by Geoff Gilson at 11:55 PM