UK General Election 2017: The Morning After The Nightmare Before 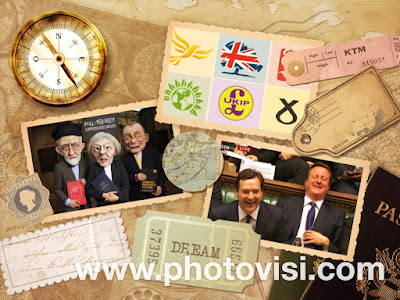 I’ve been involved in electioneering in #GreatBritain, actively and as an observer, since the #GeneralElection of 1979, when I was also a successful #BritishConservativeParty municipal candidate. And I have never seen a General Election as remarkable as the one just finished (#GE2017). Remarkable not just because so few expected it (except, sigh, for #YouGov). But because the results themselves are still so confusing.
First, the overall picture. Well, I should have stuck with my original April prediction, and the reasons for it, when I said that this might all backfire on #TheresaMay. I suspected then that the pollsters and pundits were overestimating May, underestimating the holding power of #Labour, and not factoring in the likelihood that #Tory #Remainers would, well, ‘remain’ at home.
That said, my June adjustments weren’t without merit. They just didn’t take account of certain things that really only became apparent on polling day itself.
Young people turned out in droves – good for Labour. The #LiberalDemocrats did a teeny-weeny bit better than my second prediction assumed – bad for Tories. Not all of the UKIP vote in the North of England went to the Tories. Some 30% went to Labour – bad for Tories. #ToryRemainers did stay at home, especially in London – good for Labour. All of which might have made for a better night for Labour, but for the unexpected success of the Tories in #Scotland.
Ok. That is the big picture. But it wasn’t as simple as that. Take these two stats for example. At 4 o’clock in the morning (UK time). Within minutes of each other. The Tories won #Mansfield in the North of England from Labour with an 18.5% swing. While #ReadingEast was won by Labour from the Tories with a 16.5% swing.
Never, not in almost 40 years of interest in British General Election campaigns, have I ever experienced results of such complete and utterly opposite trend. What did it mean?
I’ve been scratching my head. I think the answer is this. People were just bloody weary. Weary of politics. Weary of politicians. They treated the whole production as one big By-Election. And just decided to rebel against everyone and everything.
Labour pushed out #Conservative. Conservative pushed out Liberal Democrat. Liberal Democrat pushed out Labour. And everyone had a shot at the #SNP in Scotland.
People saw through Theresa May and #NicolaSturgeon’s manipulation, and gave them both a bloody nose. They saw authenticity in #JeremyCorbyn and #RuthDavidson, and again, rewarded them both. Plus. The great British public decided they wanted to take it a bit easier on the #Brexit negotiations.
Where does this leave us? Well. I could go into a long ‘constitutional’ chit-chat. But, I’ll spare you. Here’s my very brief prediction of a timeline. May becomes #PrimeMinister. Supported by the #DUP. Eventually, there will be a vote of no confidence (may even come from her own side). #BoJo will be given a shot. He will fail. Corbyn will take his chance. He’ll let everyone see a juicy Labour Queen’s Speech. He’ll wave from No. 10 a few times. Suffer indignities at the hands of the Tories. He’ll wring his hands. Grimace. Shake his head. Shrug. Go back to the country. And get an enhanced mandate.
Why doesn't May just do the decent thing, and resign? Because she's a self-centered, selfish, stubborn pig. She didn't call this General Election for the good of the country, or for the good of her party. She called it to enhance her own personal position. Period. She knows she can't call a second General Election herself. She would be excoriated by the voting public. She knows her party grandees want rid of her. So, she's doing the only thing she can - for herself. Hanging on grimly.
Right. That’s really all I have to add to my #BBCExitPoll post of last evening. Save for a final personal note.
#NickClegg lost his seat last night. And I’m sorry. Theresa May made great play of the fact, when she took over as Leader of the Conservative Party and #BritishPrimeMinister, that she was putting the #Cameron legacy firmly in the past.
That legacy, at least in government, and to a very large extent, was the #CoalitionGovernment of 2010-2015. Which I believe, speaking as a wettish Tory, was one of the best experiments in governance I have witnessed in Great Britain. Not least because the charm, intelligence and patience of Nick Clegg brought out the better instincts of #DavidCameron.
I will miss Nick Clegg. So will the #UKParliament. And the people of Great Britain owe him a huge debt of gratitude. He was, in every sense of the expression, a selfless statesman. 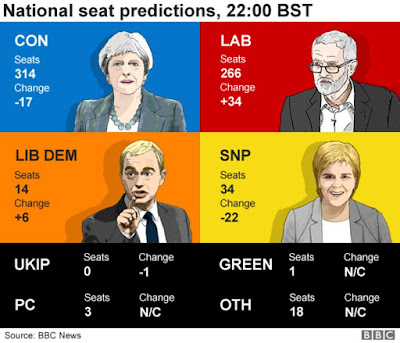 Well. The notorious BBC exit poll has been published. Exit polls are no more a result than any other poll. But these BBC exit polls tend to be accurate.
So. First. Wow. Blimey. I was wrong with my prediction. But. At least I was on the right side of wrong. I wasn’t one of those predicting a May majority of 100, even 80.
That said. This is a victory for Labour. A disaster for May. A goodish result for the Liberal Democrats. And the beginning of the end for the Scottish National Party.
Ok. What next? And let me give you a hint. There are next to no experts on the British Constitution among the British media. Absolutely none in the US. So. Pay no attention to them.
As a consequence of the rules agreed to after the General Election of 2010, when there was also a Hung Parliament, rules drafted by the then Cabinet Secretary Gus O’Donnell, the Queen will call on the Leader of the largest Party to attempt to form a government.
May’s only real chance of a government is in coalition with the Democratic Unionists and the Liberal Democrats. The Liberal Democrats won’t. The DUP probably won't be enough. In my opinion, therefore, and if the exit poll figures hold true, May will probably fail to form a government that commands a natural majority in the House of Commons.
She may try to govern without a majority. If I were Jeremy Corbyn, I would not give her the chance. Screw all the nonsense about Brexit negotiations beginning in 11 days time. The British government will tell the EU to wait.
The Constitution requires that May be given a chance. But there is no written Constitution as such. It is all conventions, wisdom, paying attention to the voice of the people, sticking a finger in the wind.
And the bottom line is this. Two months ago, Theresa May had a polling lead averaging about 20%. The British public have utterly rejected her. More than this, they have voted positively for Jeremy Corbyn and his program. This will be especially true if the Labour vote turns put to be larger than in 2015.
It matters not what anyone says about the SNP voting on English matters. We are still one country, called Great Britain. And Great Britain handed a success to Jeremy Corbyn. He went up. Theresa May went down.
The result allows May to have her chance. But only a limited one. Corbyn’s success allows him to be hard-headed. But within reason. And it allows him to govern with the tacit support of the SNP, Plaid Cymru, the Green MP, the Liberal Democrats and like-minded parties from Northern Ireland.
If May stays as Prime Minister, she will not be challenged as Leader of the Conservative Party until after the Brexit negotiations have concluded.
The Brits take this whole Queen thing seriously. The Prime Minister is the Queen’s Prime Minister, not Parliament’s.
The Queen calls on a Member of Parliament to form a government. Parliament does not choose that person.
If the Queen calls on May to form a government. Then it will be May forming that government for the Conservatives. Not another Conservative.
There is just a chance that the Conservatives, desperate to hang onto power, may demand that May step aside, in favor of another Conservative MP, who might gain the backing of Parliament.
I think that unlikely. May is stubborn. And Corbyn could turn around and say, convention requires I give May a chance. But not any other Conservative. They lost this election. They went entirely the wrong way. By bucketloads. Why should I stand aside?
I can’t say as I’d disagree.
If I had to put money on it. If this exit poll is correct. Corbyn will be Prime Minister within two weeks.
But how did this happen? Well, those polls which were showing this to be a close election were correct. And those fashioning those polls said that their models were different because they were factoring in a large turnout of young people. So. I’m guessing young people (18-25) made the difference.
Whoever becomes Prime Minister, tactics with regards to the Brexit negotiations will now change.
Theresa May was playing hardball because she said she had the country behind her. The country is likely still pretty much Brexit. But not hard Brexit.
Besides, those doing the negotiating for the EU are going to be the ones playing hardball now.
What else? Oh yes. Once the Brexit negotiations are concluded, May will be gone. Unless she resigns before the end of this coming weekend. And. She won't be getting a bust in the Carlton Club.
Even if Corbyn does not become Prime Minister, he’s not going anywhere. He now has the opportunity to choose his preferred successor.
The Liberal Democrats will be reasonable happy. Provided the exit poll works out. And gives them a few extra seats.
The SNP are finished. This was a bad result. They are not now going to get a second independence referendum. Labour won’t give them one.
Labour will be taking the view that, once Brexit is done, once folk realize there isn’t going to be a second referendum, those folk will abandon the SNP as a one issue party. Just as UKIP proved to be. At which point, Labour will be expecting to get back their voters.
Um. That's it. Until we get some actual results. May. 100 seat majority. Wipe away the tears of mirth. Never a dull moment in the UK, eh? 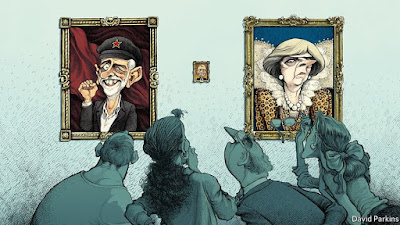 The YouGov Model for UK Election 2017 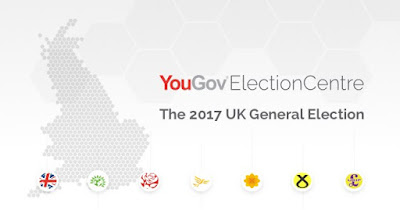 Well. With all the brou-ha-ha in the UK over today's YouGov poll. Which suggests. Completely against the grain. That the Tories will actually lose seats on June 8. I thought I'd be fair and offer the 'science' behind the YouGov polling. From the very lips of their chief political scientist.
To be honest, I lost interest after "This model is then used to estimate the probability that a voter with specified characteristics will vote Conservative, Labour, or some other party."
Sigh. Why not just walk down a bloody street and ask people how they're going to bloody vote? When did this all become so complicated? 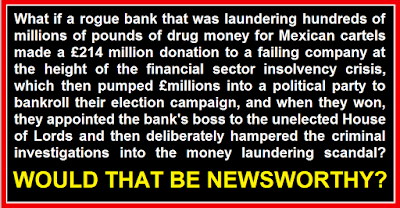 It ain't just me rabbiting on about corruption in the British Conservative Party. Mind you. My corruption isn't about drugs and banks. Mine is about arms deals and banks. Well. I say 'mine.'
Thank you for posting the original story, Gerry Platt, and for directing me to it, Maggi Gilson.
I've contacted the people behind this story. For help. To exchange. Whatever. With my luck, they'll think I'm a British Intelligence stooge ...