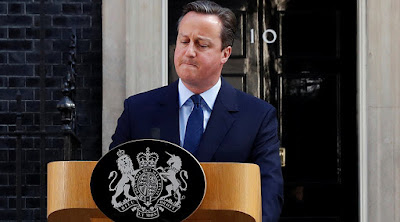 I may be the only Tory in the universe to say so, but I'm going to miss David Cameron. The British Conservative Party is a broad church. It's why, even though my politics have shifted leftwards during my lifetime, I have still been able to accommodate my British politics within the rather nervous embrace of that Party.

But now, we enter a time of darkness. Not just for the British Conservative Party, which is about to be taken over by the neanderthals (think Donald Trump, with an Oxford accent). But for Great Britain generally.

The European Union is going to strip Great Britain bare, before it throws it out ignominiously. All this talk of the rest of the world still respecting Great Britain will be seen to be so much tosh. Great Britain has become little more than the City of London, surrounded by a rather quaint tourist attraction called 'the Queen and her lands.' For sure, folks will do business with Great Britain, but on their terms, and at their pace. Not those of Great Britain.

For six years as Prime Minister, and for ten years as Leader of the British Conservative Party, David Cameron kept his cool and his pride, as the media treated him as the 'not' guy. Not-Thatcher, not-Blair. He was denigrated, diminished and denied. He did make tough decisions. That wasn't just a testosterone battle cry. He coaxed Great Britain out of one recession. And laid the foundations to help it survive the next one. He didn't please everyone. He didn't try to. He knew that was impossible. He just attemptied to do the right thing for the country as a whole.

His brave decision to move the British Conservative Party closer to the center of political thought was not just show. Many of my friends may disagree with that sentiment. But he took on the right within his Party. Those who now crow at his demise. And time and again, he put his credibility on the line when a progressive issue close to his heart was on the agenda. Not least the issue of gay marriage.

The irony of his resignation, indeed the opposition to him over ten years from those within the right-wing of his Party and in the right-wing media, the irony is that, tacky politics aside, it was his decision to hold a referendum on Europe that was the cause of his leaving. They may laugh now. But ultimately, they will thank him for the opportunity he gave to the British people to have their voice heard.

History will show that Cameron was a seriously underestimated man. He won two General Elections, in very difficult circumstances. He gave the British people three opportunities to express themselves on issues central to modernizing British politics and the nation - the voting system, Scottish independence and then Europe.

But for me, I will remember him as a leader who surprised and then warmed with a no-nonsense, man-of-the-world, self-confident, courageous and compassionate approach to the business of guiding the people for whom he clearly cared through the complexities and dangers of an increasingly intense world.

Now, let's not get too mushy. Fact is, and this is perhaps the most surprising item of all, Cameron has not yet even turned 50. Many years left. Though I expect for the next decade he will want to focus merely on raising his young family, and supporting his wife in her career ambitions.

In the meantime, it would be an idiot who does not see a likely parallel in American politics. In which case, since folks seem to be turning against progressive elites who do not listen to them, Hillary should be very scared right now ...