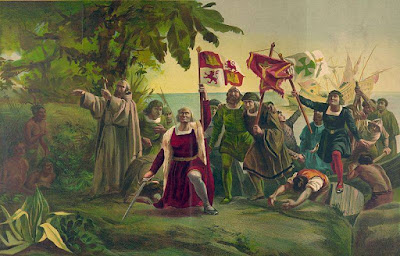 Columbus Day. An excellent moment to remind ourselves that nation-building, invasion, occupation, racial and social cleansing, the obliteration of homelands at the end of a gun, these are not concepts that were invented in the 21st Century.

Neither was the reaction of: well, I’m ok, so who cares? Nor its alter ego: I’m not ok, please find me someone to blame.

What is new is the ADD, remote control, virtual reality notion that if we switch onto Facebook, post a rant (like this one) and photoshop a meme, we have made a contribution to justice. No we haven’t. Grow up.

You only make change when, well, you make change. Which generally involves a lot of hard work. Away from the cameras. And away from people ready to hit the Like button.

We are none of us self-sufficient islands. Whether or not we choose to notice or believe it, we are dependent on other people. And more likely than not, somewhere down the chain, there is injustice supporting our chosen way of life. If we have a beating heart, we should find that injustice and fight it. 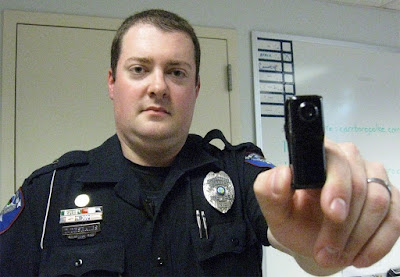 Just heard from Carrboro, NC Alderman Damon Seils, via Carrboro Police Chief Horton, that the third Carrboro Community Forum on Policing will, in fact, on this occasion, be held in the OWASA community room. Beginning at 7.00pm, on Wednesday, October 28th. See you there!

How To Piss Off An Israeli Intelligence Officer ... 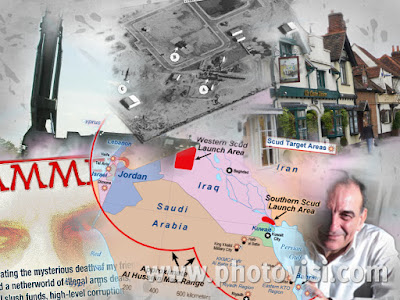 I'm not always the brightest bulb on the Christmas Tree. But I get there in the end. Even if it takes me 27 years.

Those of you who have read my book (Maggie's Hammer), will know that there is an intimate connection between Ari Ben-Menashe, his book (Profits of War - just reprinted by my publisher, courtesy of my intro) and my book. Indeed, it is why I made contact with Ari in the first place.

It was back in 1992. I was trying to make some sense of what it was my friend, Hugh Simmonds CBE, had been involved in. What arms dealing, with which country, on behalf of whom?

I found myself in Atlanta, Georgia in 1992. Working with my brother. But, as co-incidence would have it (or was it co-incidence (?) - another book, for another time). There was a major court case coming to a head in Atlanta. Concerning the illegal provision of loans by a bank called BNL to US and UK companies attempting to sell arms to Iraq in contravention of a UN arms embargo.

So, my attention was on Iraq. Ari first published his book that year. I bought it, as I had bought hundreds of others, hoping to find some set of circumstances that might fit Hugh's activities and death.

In his book, Ari described how, among many other adventures, while Counter-Terrorism Adviser to Israeli Prime Minister, Yitzhak Shamir, he had been tasked by Shamir, in about 1986, with stopping the illegal trade in arms being engaged in by the West (primarily Great Britain) with Iraq.

As part of this task, Ari detailed an Israeli operation to send assassins into Europe in November of 1988, to take out the primary protagonists in this illegal trade of arms with Iraq.

I wrote to Ari, out of the blue, asking him if he knew Hugh. Amazingly enough, he called me 24 hours later to say that he had Hugh's name on a list of people of interest. According to that list, Hugh had been arranging a deal to sell GEC (UK) engines to Iraq, in order to extend the range of their SCUD-B missiles. An extension which would have put Israel in range. And Hugh had died as a result of being on that list.

I met with Ari twice, and spoke with him on and off between 1993 and 1996. I liked him. I like rogues. He was very generous with his time and his information. He was good company. And I'm happy that my publisher has agreed to reprint his book.

All of this within certain boundaries. My British Intelligence source once told me, 'once a boy scout, always a boy scout.' Ari is a controversial figure. But, he is alive. Which means he is a former nothing. And is likely being used by the Israelis to undertake stuff they can't be openly associated with.

I have never been clear why Ari spoke, and still speaks, with me. He could simply have ignored me. Did he want to know what I knew? Was I useful to him? Was I being fed false information, to deflect? If so, whom and from what?

All I know is that he did speak with me. And, bless him, he lied on occasions. And I have had, and still have, to sort out the truth from the chaff.

For the period 1993-1995, Ari's line was, Hugh is a name on a list. 'We' are interested in him because we now believe that he was a primary component in the pipeline of arms to Iraq, and the flow of illegal arms kickbacks to senior politicians within Great Britain, both Labour and Conservative, and including the Thatcher family.

It follows as night follow days that, if indeed Ari is correct, and Hugh was that important component, then the Israelis would have liked to have known about Hugh in the Eighties, because Shamir had tasked Ari with stopping the pipeline of arms to Iraq.

I met Ari for the second time in Montreal, in 1995. In a small hotel room. Eight storeys up. I know. I counted. It was at this meeting that I told Ari that he was lying. Cf. Counting storeys.

Ari went silent, and very frosty. Frosty looks from Israeli Intelligence officers are right up there at the top of the list of Tums moments. 'Why would you say that?' Because you keep pretending Hugh is a name on a list. You can't know what you keep telling me you know unless you knew Hugh.

Got from 1-6 counting storeys before Ari spoke again. 'Yes,' he said with a smile, 'but he wasn't using that name.'

The last time I spoke with Ari was in 1996, after Hugh's British Intelligence partner, Reggie von Zugbach de Sugg (I am honestly making up none of this), told me that Hugh had been trained to kill.

I had a fairly blunt conversation with Ari. In which he denied that the Israelis had taken out Hugh ('we wouldn't take out someone like that'), and merely posited that Hugh had got into such a tangle with so many different agencies that he was going to have 'to go' sooner or later. In some fashion.

For years, that is where I left it. Until these past two weeks. I told you. My brain is not always the fastest.

At the beginning of this year, Ari very kindly agreed to put an up-to-date quote on the back of my book. Confirming that Hugh had been part of the team that had laundered proceeds back from illegal arms deals with Iraq in the Eighties.

At the end of August, I began my series of interviews with radio programs around the US. It was during one of those that a penny finally dropped.

Ari was tasked with stopping the Iraq arms pipeline. He knew Hugh. He knew what Hugh was doing. He told me. In glorious detail. SCUD-B missiles. Israel. Hugh wasn't a name on a list. He was a living human being. Right in front of Ari.

If Ari didn't take steps to stop what Hugh was doing, it begs the question, why didn't he?

My publisher wants Ari and I to appear on a radio show together. I'm game.

I'm not angry. 27 years is too long to stay angry. But not too long to remain determined. The soul-destroying eyes of an 11 year old girl, desperately trying to understand why her father has left her alone, will do that to a person's determination.

And I am now determined to ask Ari if the Israelis were responsible for halting Hugh's activities, and if that 'halting' included his death. Live. On air. For the world to hear.

If he refuses the interview, I will write him an open letter.

If he refuses to answer, then I will write formally to the Israeli and British Prime Ministers.

I have always known that there was something deep and mysterious at the heart of Hugh's death, which did not make sense. Even more dark and mysterious than illegal arms deals, slush funds, kickbacks to senior politicians, and strange covert arrangements between the US and the UK.

Actually, more to the point, even if it sounds banal, what if the Israelis took out a rising British politician, without knowing it?

And what if both countries decided it was simply too embarrassing to acknowledge?

Now, would that meet the criterion of uber-dark and mysterious? Would that be something so extraordinarily career-destroying (i.e. its cover-up) that two British Prime Ministers would go to unbelievable lengths (unbelievable, but true, and in Maggie's Hammer) to avoid even discussing the name, Hugh Simmonds?

Now, I only mention all of this because I have done so in my past two radio interviews. And it occurs to me that maybe I should let a few folks know.

And yes. I will be checking under my car the next few days ...

[Oh. By the by (or, BTB), I attach a link to an article stating that Russia is not bombing ISIS, only because I want a note of the article somewhere!]